MALAYSIAN cartoon artist Weinye Chen’s work was the subject of plagiarism by an online agency acting on behalf of Domino’s Pizza, Chile at the weekend. While the company involved has since apologised and come to a financial arrangement with Chen, the incident highlights the problems encountered by creatives, once their work appears online.

Back in September 2017, Chen posted a piece in response to the then-trending meme, “distracted boyfriend,” as part of her “It’s Weinye” webcomic.

On Sunday, she was contacted by one of her 124,000 Instagram followers, who supplied a screengrab from the Domino’s Chile Facebook page. 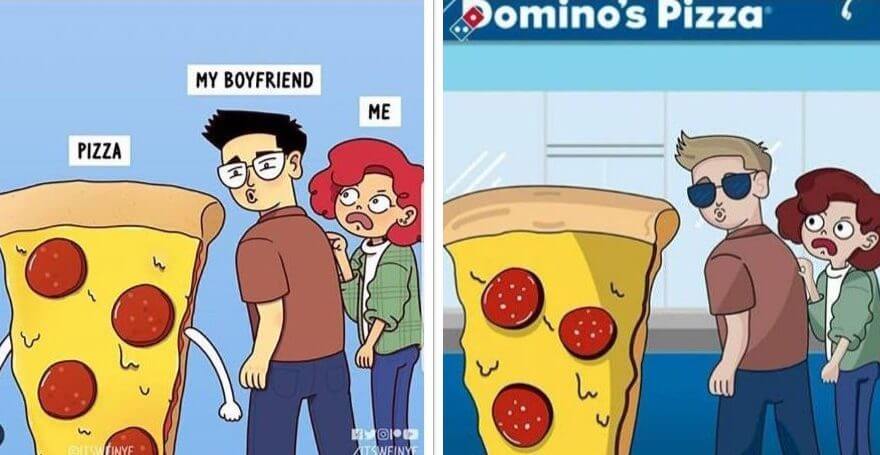 “I was shocked at first,” Chen told social media commentary site Mashable. “I’ve had my work plagiarised before but usually by small, random social media accounts or unknown websites. Nothing like this. This has been my biggest encounter yet. I was frustrated but I wasn’t angry. I was more determined to get to the bottom of the matter so that I could resolve it as soon as possible.”

Initially, Domino’s Chile’s response was to post “memes son memes” (“memes are memes”) followed by a “woman shrugging” emoji. As is often the case, the world took to Twitter to voice its discontent, with several posts lampooning the fast food icon.

Since the weekend, Chen has released a statement which draws a concluding line under the whole affair, available in its entirety here (it is prefaced by a figure saying, “Please read the entire thing. It’s not gonna kill you.”)

The incident highlights the dichotomy of being a creative in today’s interconnected world. Without the fuel of the Internet, artists cannot get the publicity needed to survive. But at the same time, by placing work online in any unadulterated/un-deprecated form, it is susceptible to – at best – pale imitation, or even open, commercial exploitation.

The music industry is only just beginning to recover since the arrival of the Internet and compressed audio formats such as .mp3. Services such as Napster decimated existing royalty-distribution systems, and some musicians are still not happy with the monies they get from streaming services.

SEE ALSO: Fahmi Reza has ruffled many feathers in his time. Now he’s being celebrated for it

In the visual arts, watermarking is possible to prevent hi-res image copying, but media designed for consumption on-screen, such as Chen’s work, is more difficult to protect.

The exploitation of a single artist’s work made the virtual (Twitter) headlines because the body behind it was a multinational company. But day-to-day copying and re-use of imagery among other art forms, is an expensive cross which creative artists have to bear.