RELIGIOUS conservatism and restrictive policies that the Duterte administration has inherited are fueling a rising human immunodeficiency virus (HIV) epidemic in the Philippines, particularly among men who have sex with men, a report released Thursday by global rights group Human Rights Watch (HRW) said.

The report said Philippines has outstripped its Asia Pacific neighbours in terms of HIV prevalence, with statistics showing a tenfold increase in cases recorded over the last five years. It said last year, the Philippine Health Department reported that at least 11 cities recorded high HIV prevalence rates of more than 5 percent among the MSM, with Cebu City – the country’s second-largest city – recording a staggering 15 percent prevalence rate.

The numbers were markedly higher than the overall prevalence rate for the Asia Pacific region, which was just 0.2 percent, as well as the rate in Sub-Saharan Africa, which has the most serious HIV epidemic in the world but has a rate of 4.7 percent for those in that group. 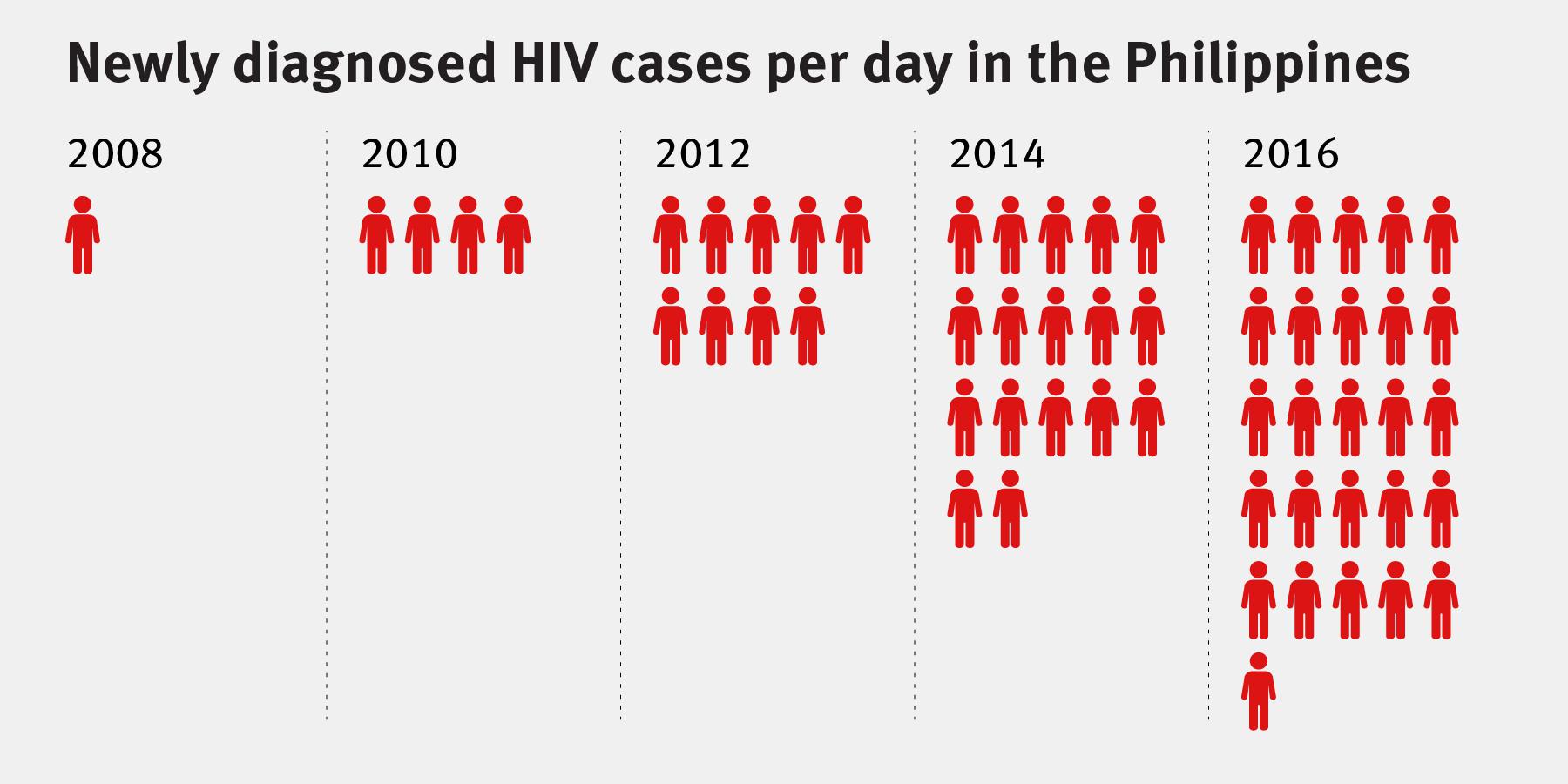 HRW in its report attributed the alarming rise to conservative elements in the government; laws that prohibit condom access and HIV testing to those below 18 years of age without parental consent; and “nonexistent” national education on effective HIV prevention methods. These failures, the group said, along with the social stigma that comes attached to those who engage in same sex practices, have contributed greatly to the worsening epidemic among the MSM.

“President Rodrigo Duterte has inherited a legacy of failed or counterproductive policies of previous administrations that are contributing to the alarming increase in HIV infections among men who have sex with men,” HRW’s Philippines researcher Carlos H. Conde said in a statement on the report.

“Reducing HIV transmission isn’t rocket science. But it does require the Duterte government to implement an HIV prevention program and remove obstacles to condom and HIV testing access so that young Filipinos – particularly men who have sex with men – can protect themselves from an otherwise preventable illness.”

An estimated 80 percent of Filipinos are Roman Catholics and the Catholic Bishops Conference of the Philippines (CBCP) has long been vocal about its opposition to promoting safe sex practices and the use of contraceptives to prevent the spread of HIV.

The CBCP, said HRW, “has long had an obstructive influence on anti-HIV policies”.

“Since the early 1990s, the CBCP has issued official statements vilifying condoms, campaigned against legislation that would expand condom access, and levied personal attacks against government officials who favor inclusion of condoms in HIV prevention programs.

“The Church, backed by conservative lawmakers, has obstructed efforts to expand public education and awareness of the value of condoms in HIV prevention on the basis that condom use promotes promiscuity,” the report said.

It said in the early years of the HIV epidemic, the Philippine government had, despite opposition from the church, instituted effective policies to fight its prevalence. However, it said, these were at the time targeted at commercial sex workers and were never adapted to suit changing times.

“The government has not tailored HIV prevention policies to address the needs of populations most at risk of HIV infection, a failure that has facilitated HIV transmission among MSM populations,” it said.

“Promotion and commercial marketing of condoms ignores the population of men who have sex with men by focusing on heterosexual couples rather than lesbian, gay, bisexual, or transgender (LGBT) people,” it added.

Although condoms are readily available for retail sale at pharmacies and convenience stores, a legal restriction in the Responsible Parenthood and Reproductive Health Act 2012 (RH Law) prohibits condom purchases by individuals under the age of 18 without parental consent.

This means store workers would routinely refuse to sell condoms to youths or demand that they provide identification. HRW says this could be seen as “off-putting” for even those over 18, adding that those it interviewed for the report also described their unease when purchasing condoms. 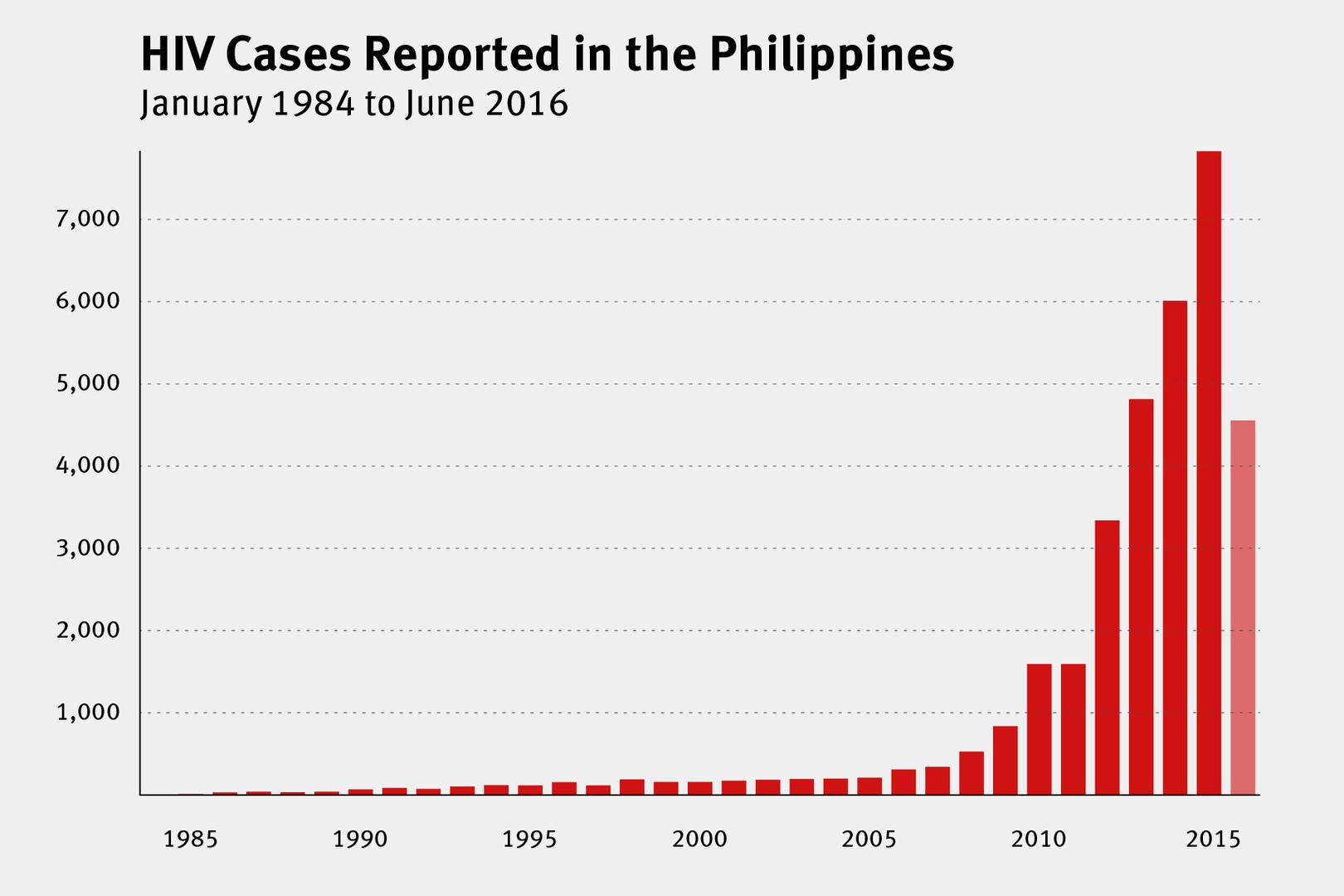 On top of the age restriction in the RH Law, HRW said local government policy and other legal obstacles have also added further barriers to condom access both for the MSM and the wider population.

For example, it said, the cities of Balanga in Bataan province, and Sorsogon in the Bicol region, issued directives to government clinics forbidding them from procuring and distributing contraceptive products, including condoms.

Sorsogon Mayor Sally Lee reportedly threatened to punish government employees who refused to comply with the order and called for the removal of condoms from government clinics due to what health personnel described as “morality issues”.

Last January, the Philippine Senate cut PHP1 billion (about US$21 million) from the Health Department’s budget for family planning commodities, including condoms. The senators who lobbied for the cut said it was for fiscal savings but according to HRW, this only reflected the influence of conservative elements in the Senate.

One major impact of the cut is this: Unless the Senate reinstates funding, clinics are likely to run out of condom supplies by early next year.

Additionally, the government has also failed to provide adequate public access to HIV testing, HRW said. It noted that apart from restricting condom sale without parental consent to those above 18, Philippine law also imposes the same rule for HIV testing.

The report said some clinics skirt this provision by assigning its personnel to act as “guardians” in some cases, but added that public officials have slammed the age restriction as a serious obstacle to testing, counseling, and treatment for adolescents and young men, and a barrier to accurately measuring the epidemic’s growth.

“These restrictions reflect the influence of conservative forces in government at both national and local levels, driven by the underlying authority of the Catholic Church,” HRW said.

The report also accused the Philippine authorities of failing to provide education programmes on safe sex practices, saying this is despite the fact that national laws say sexuality education is compulsory.

Both the RH Law and the Philippine AIDS Prevention and Control Act 1998 (AIDS Law) mandate compulsory “age-and-development-appropriate” sexuality education for adolescent, with the former specifically stipulating that this includes sexual health, children’s rights and values formation.

“However, in practice, the majority of public and private schools provide no sex education classes or instruction on methods to prevent sexually transmitted infections,” HRw said.

It added that most of those living with HIV who were interviewed revealed that their schools provide no sex education classes, let along specific lessons on HIV prevention and condom use.

“Those who told us that their schools did offer sex education courses described the curriculum as focused strictly on dry explanations of human reproductive functions, rather than on condom use to prevent sexually transmitted infection,” it said.

HRW noted since Duterte assumed office in June, his administration has remained somewhat silent on the country’s HIV epidemic.

It noted that the government has yet to announce any specific policies to address the matter, while Duterte himself has sent mixed messages on his stance.

During his election campaign, Duterte had spoken in favour of improving LGBT rights, which activists had lauded and expressed hope that the support would extend to policies addressing the HIV epidemic among the MSM.

The tough talking politician has also committed his government to full implementation of the RH Law.

But at the same time, HRW noted, Duterte has also engaged in “vitriolic anti-gay rhetoric”, which it said may indicate a different path from the one suggested by his more positive public pronouncements.

It said: “The Philippine government, with the assistance of international agencies and donors that support health in the Philippines, should demonstrate leadership in taking the necessary measures to address the country’s worsening HIV epidemic.

“That leadership hinges on the political will to recognize both the severity of the epidemic and the decisive role that the government can play in addressing it. By removing legal and policy obstacles to condom access and remedying the dangerous deficit in public awareness of safer sex and HIV prevention methods, the Philippine government would have the opportunity to stop a growing health crisis in its tracks.”

In its recommendations, HRW urged the government to abolish the age restrictions on condom access and HIV testing as well embark on a “condom promotion strategy” in order to remove counter misinformation about its use.

It also urged for penalties on municipalities that refuse to comply with the RH Law’s guarantee of public distribution of contraceptive commodities, including condoms.

The Education Department, it added, should implement age-appropriate sex education modules in public and private schools nationwide, with specific and evidence-based instruction on HIV prevention.

Conde said: “The Duterte government has a golden opportunity to remedy the legal and policy errors of previous administrations by implementing proven low-tech and low-cost interventions that can help stop in its tracks the country’s HIV epidemic among men who have sex with men.”

“Failure to do so will only ensure that the already alarming number of new HIV infections among men who have sex with men will continue to rise.”

For the report, HRW staff conducted field research between February and October this year in four cities in Metro Manila (Quezon City, Makati, Mandaluyong, and Manila) and in Cagayan de Oro, Cebu City, Puerto Princesa, Sorsogon City, and Balanga City. The cities were selected due to their high HIV incidence and prevalence rates.

Interviews were also conducted with 82 individuals, including 39 people living with HIV, as well as LGBT rights advocates, advocates for the rights of people with HIV, health workers, government officials, and peer educators.