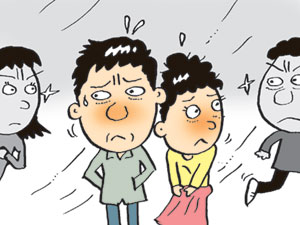 “These days I can’t get a job at all. When I say I’m from North Korea it becomes the economy or something else…”
/>
/>34-year-old Kim Yeong-woon (a pseudonym), who graduated from a music college in North Korea and worked as as a singer before fleeing North Korea in 2001 and arriving in South Korea in July of 2004, said that in an interview on April 22 with the Dong-A Ilbo. She has not been able to find work in a long time, having previously been a freelance actress in musicals. Kim said, “I formed a performance group with other North Korean refugees and put on shows in the provinces, but there has been one cancellation after another… Time after time it seemed like North Korean performances made people uncomfortable.”
/>
/>With the sinking of the Cheonan said to be likely the result of a North Korean act, and the case of two North Korean spies being uncovered, North Korean fefugees are facing deepening anxiety. An increasing number of them are losing their jobs or feeling personally threatened as society shuns them. With two large problems likely caused by North Korea, they are being watched with critical eyes and are finding it difficult to settle in and live their lives.
/>
/>50-year-old Kim Sae-yong, a member of the 새터민평양민족예술단, has more wrinkles around his eyes. Seven of his last nine scheduled performances were cancelled. Kim said, “a lot of our performances have been cancelled over the Cheonan sinking, and other groups say they’re having similar problems… that incident and the spy issue make people uneasy about watching North Korean performances.”
/>
/>Kim added: “Basically law-abiding North Korean refugees are afraid of misunderstandings and suspicions.” As soon as the spy incident came to light, many North Korean refugees began to feel personal threats. Kim said, “Recently I’ve been getting threatening phone calls from people who won’t say who they are… the police are telling us to be very careful about these phone calls.” A North Korean refugee associated with The Daily NK (NK지식인연대) said, “I was supposed to be hired by a shipbuilding company but when the spy incident came out I was suddenly considered suspicious and the offer was rescinded.” Many told us they have similar stories.
/>
/>43-year-old North Korean refugee Song Sun-yeong (a pseudonym), who works in a Mapo-gu restaurant, has been keeping her head down lately. Whenever a customer is watching news of the Cheonan sinking they say “this must be North Korea’s doing.” Ms. Song said, “I feel like I should be apologizing, that it’s our fault, and I hang my head.” Her co-workers do the same, not saying what they really think. Ms. Song also never walks home at night by herself. Among North Korean refugees it is often said, “there could be people watching for North Korean refugees, so don’t walk alone at night.” She said, “even though I’m used to the area I’m afraid to walk by myself, so my husband comes to walk with me every night.”
/>
/>With ties between North and South Korea increasingly strained, an increasing number of North Korean refugees are worrying that their family members left behind in North Korea could now be spies. A member of The Daily NK said, “there are children who worry that their families will be threatened and spies sent for them… many, many refugees these days are trying to confirm that their family members are still alive.”
/>
/>30-year-old Lee Yeong-hwan, head of research at the Citizens’ Alliance for North Korean Human Rights (북한인권시민연합), said, “there are 20,000 North Korean refugees in South Korea, and most of them are in safe situations and are apparently not worried… it’s easy to feel worried when you have a lot of family members left behind in North Korea and such a short time to get used to the new country.”